Tornado Cash, a cryptocurrency mixer, has been sanctioned. The US government has sanctioned Tornado Cash, specifically on August 8 for money laundering. No US citizen or firm formally registered in the nation can now connect in any manner with the sanctioned organization. The group’s assets will be confiscated, and the organization itself will be dissolved. Furthermore, the Tornado Cash-based open-source code for smart contracts that operate on the Ethereum blockchain has been pulled. This situation might end up being quite awful for all of us.

Tornado Cash, a cryptocurrency mixer, has been sanctioned. The US government has sanctioned Tornado Cash, specifically on August 8 for money laundering. No US citizen or firm formally registered in the nation can now connect in any manner with the sanctioned organization. The group’s assets will be confiscated, and the organization itself will be dissolved. Furthermore, the Tornado Cash-based open source code for smart contracts that operate on the Ethereum blockchain has been pulled. This situation might be quite awful for all of us. 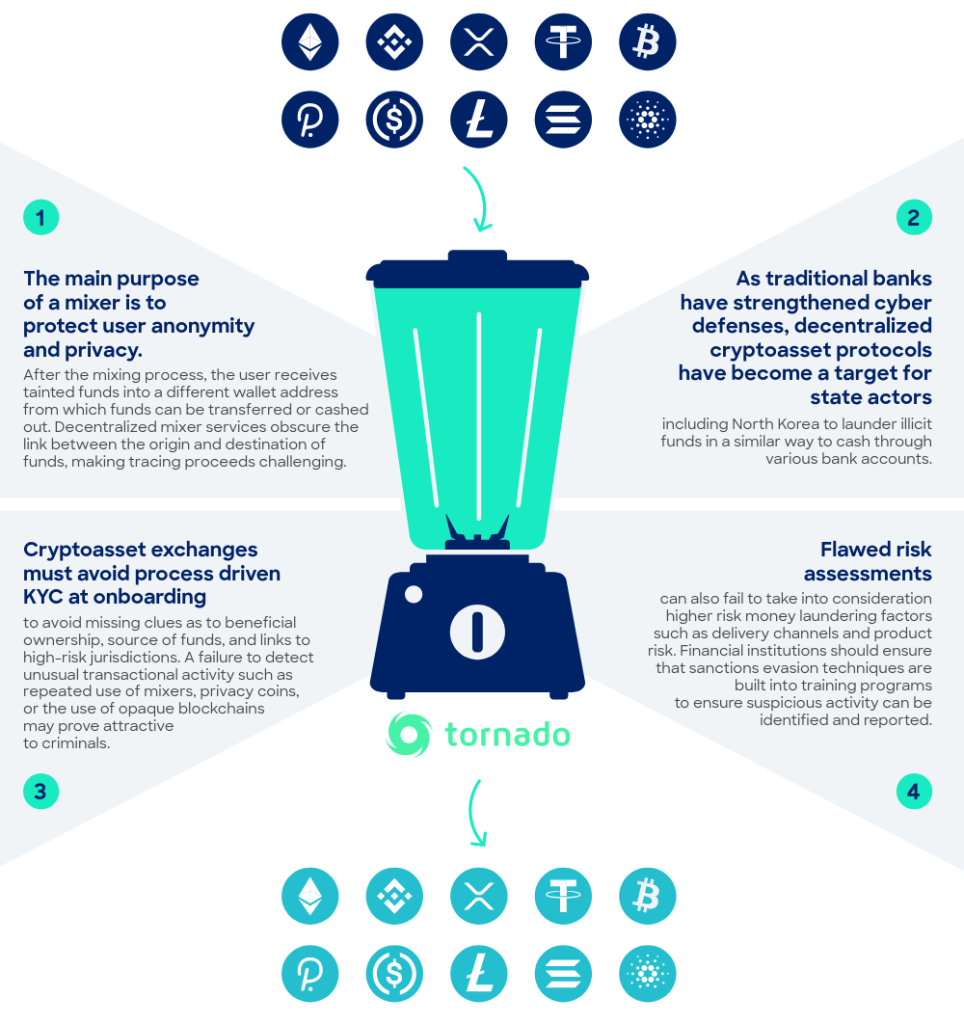 A well-known service called Tornado Cash has been used to mix cryptocurrencies. All cryptocurrency wallet owners’ privacy was protected thanks to this procedure. There are ways to follow transactions and link individuals with their assets, despite the fact that transactions on bitcoin blockchains are pseudonymous and participants can only be recognized by their public keys. Initially, everyone was drawn to Bitcoin because of its anonymity, but it later became clear that it was completely unanonymous. One method for entirely anonymous system transactions is to use cryptocurrency mixers.

Mixers (also known as tumblers) take many deposits and then blend them into one huge sum over a random time period. After a period, portions of this sum become accessible. Because this is the mixer’s sole source of revenue, he receives the proportion of deposits (typically one to three percent). Because money deposits and withdrawals are not coordinated in time, consumers may lose the link between a portion of the bitcoin and their assets. To further conceal any ties, privacy-conscious individuals are allegedly modifying their withdrawal practices by utilizing sums other than deposit amounts.

Mixers are also useful when you need to make an anonymous donation in a country where it is unpopular. For example, donating money to help Ukraine – if you do it through a mixer, it is unlikely that anyone will know about it. However, sometimes such anonymity is required for really objective reasons—for criminal and fraudulent actions. And then the mixer is a kind of way to launder money. However, keep in mind that such a tool can be used for both good and evil. As a result, it is the people who abuse the tools who must be sanctioned, not the tools themselves.

One of the reasons thieves use mixers is their anonymity. The reality is that because of current anti-money laundering measures, any kind of anonymity or pseudonymity is typically forbidden. For instance, when converting bitcoin into fiat money, a person must do so through a financial institution that abides by the “know your customer” standards and regulations (KYC). A financial institution is required to get identifying information from its clients in order to link this location to a specific individual. At the same time, anonymity does not exist. Because of this, one of the key motives for a criminal wanting to mix his stolen money before the withdrawal is that it is absent. There are nonetheless good reasons for this.

Let’s think. We usually don’t show our bank balances and bank card purchase history to anyone. All transactions are based on a specific address or key and a person. All this information is stored in the blockchain. Therefore, the data in the organization monitoring KYC can “output” all its customers, their assets, and their transactions. You don’t have to be a criminal to want to avoid this kind of disclosure.

Many will ask, what is the legal status of the ten units of the cryptocurrency obtained legally, which are mixed with one unit, say, from some criminal source? We deposit our money in banks that also accept some deposits from questionable sources. But the whole difference is that the presence of “bad” money usually does not spoil the withdrawal of funds from them. It is quite possible that the goal is to make these mixers work according to the KYC principle. However, the whole point of Tornado Cash transactions means that there is no trustee to do this.

Tornado Cash’s smart contracts are designed in such a way that participants and smart contract code share custodial obligations to some extent. Contracts are programs that run on the blockchain to ensure (assuming no faults) that all parties complete the tasks that are asked of them. The code required for work was formerly available on the Tornado Cash GitHub repository, however, the repository was simply removed from public access on August 8 owing to fines.

In addition, these smart contracts are still hovering around the Ethereum blockchain, and nothing but concern that they are tainted by association with Tornado Cash arises. However, this does not prevent people from using them. This is a way to troll the authorities: you can simply send small amounts from banned Tornado Cash addresses to famous people. The fact is that such transactions cannot be rejected by the recipient. And this means a violation of sanctions if you look from a technical point of view.

What Is The Reaction To The Sanctions?

Given that the code was protected by freedom of speech, at least in the United States, its removal from GitHub seems to be a clear violation of the constitution. Cryptographer Matthew Green emphasized this. Moreover, the expert also pointed out the irony of removing code from a distributed, decentralized version control system such as Git. It is suspected that thousands of copies of the Git repository are available in different places and that any attempt to remove the code from free access will cause it to spread even more.

The Electronic Frontier Foundation is likewise worried about this action, noting that the list of sanctioned organizations includes an open source initiative. It is important to note that there are no people on this list, which is just a long list of bitcoin addresses.

However, the service did not stop at merely destroying the mixer repository. Furthermore, the service revoked the validity of all accounts associated with the project’s creators and participants. One of the founders, by the way, was arrested in the Netherlands. It occurred on August 12. Other organizations, including cryptocurrency corporations, have also distanced themselves from Tornado Cash, freezing mixer-related assets. Meanwhile, anyone who is subject to US law and whose cryptocurrency is included in Tornado Cash contracts will be unable to use it legally. Due to the nature of smart contracts and the US government’s persistence, anybody in this situation should definitely intend to just walk away from these assets. And it doesn’t matter whether they are obtained through fraud or not.

But let’s not blame GitHub. Perhaps the service had no alternative solution other than to delete the Tornado Cash repository, although the uselessness of this is quite obvious. The code is actually just collateral damage. But it would be strange to find out that repositories with the full history of the project, although with different hash values, already exist elsewhere on GitHub itself. Creating a mirror repository from scratch, which is only one byte different from the original, will create a completely new Git “blockchain”. Avoiding checks of identical object hashes is also trivial.

But the only thing we really can’t figure out is account blocking. As we said above, no one is on the sanctions list, so there is no reason to deactivate accounts. GitHub didn’t even think about the fact that they could have other projects on the service. However, it doesn’t matter now – they are no longer available anyway. Of course, this can have a ripple effect throughout our community. Those people who use GitHub for their projects may want to think carefully about what the company can do with its repositories-without any real evidence and without any accusations-in the future. But such actions affect the reputation of GitHub, and then the developers will think next time whether it is worth using this service.

A news statement from the United States, as usual, exaggerates the mixer’s deeds. Yes, there have been some high-profile cryptocurrency thefts, including one in North Korea in which all earnings were laundered using Tornado Cash. According to the statement, a cryptocurrency worth around seven billion dollars was laundered in this manner, however, this number appears to blend any legitimate usage with criminals since it is often used for the entire value of all service transactions.

No one doubts that fraudsters should be punished to the fullest extent of the law and convicted. But it’s very easy to downplay the collateral damage from this kind of action by trying to portray it as mainly affecting criminals. In a word, this shows Torando Cash as a terrible tool that does not carry good goals. All of this is part of the same scenario that attacks strong encryption and tools like Tor because they can also be used by terrorists, child sex offenders, and other bad people. But let’s think logically — the tools are not to blame; it is the people who use them who are to blame. And if Torando Cash is used for money laundering, it does not mean that it is the only functionality. It was created primarily to perform harmless transactions, and the fact that it was used illegally is the fault of criminals.

As you are aware, we do not pay much attention to the machinations of the cryptocurrency world – all of this, in general, is way above our capabilities. There are several stories and examples of fraud related to this region. However, it is impossible to link the blockage of Torando Cash with them because it already involves fundamental freedoms and human rights. Governments take things away without due process of law, as with the much-maligned asset forfeiture program, and compel people affected to justify how they have been wronged—often at significant expense.

Such situations can also serve as a litmus test for the code’s “freedoms” and “rights.” The Tornado Cash code still remains; it operates on indestructible infrastructure and may be utilized for both good and evil. What will people do to prevent horrible things from happening? We believe HAL 9000 will be keeping a close eye on this.

In 2022, v2 domains in the Tor network are supposed to become extinct

Where to buy crypto

Spanish
wpDiscuz
We don't use any cookies and don't track our usersTHANK YOU!